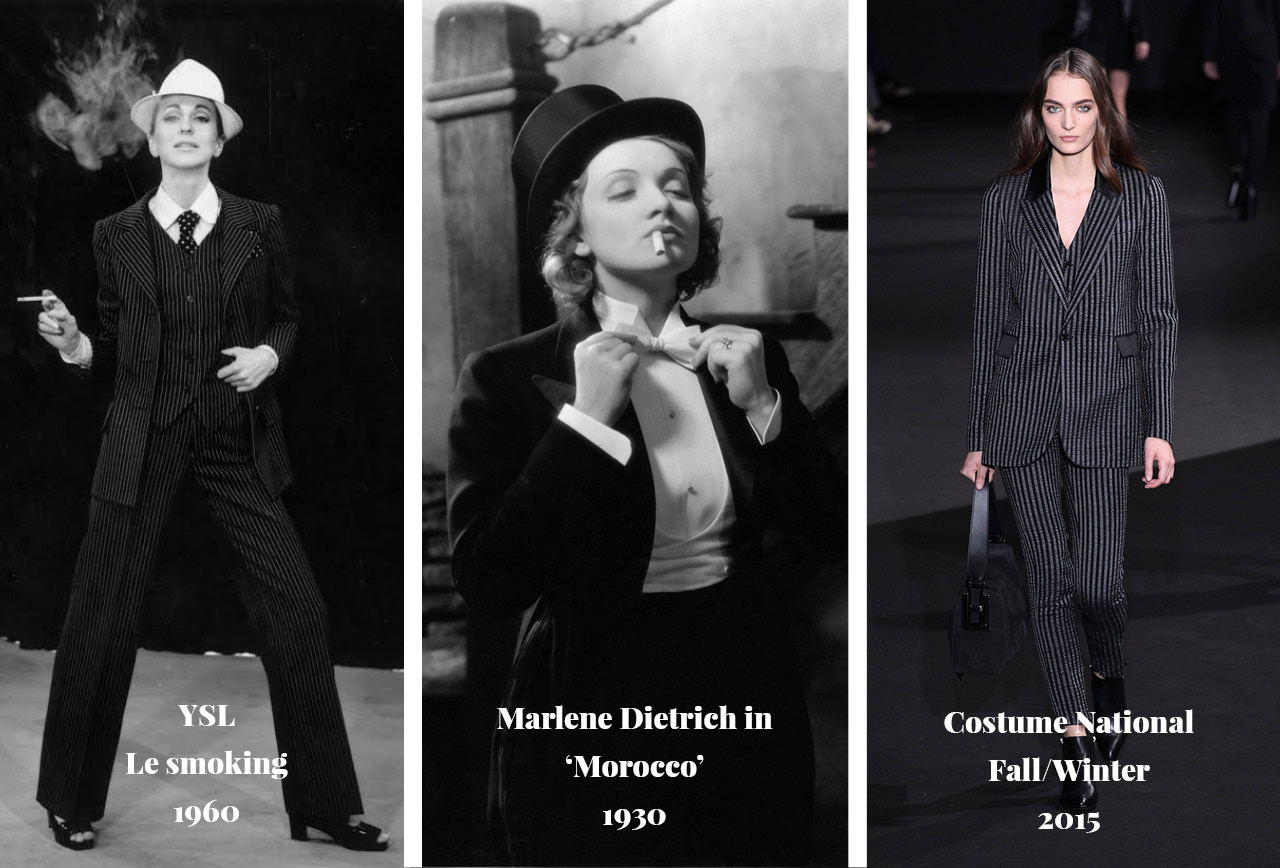 Looking back in years in the history of costume we realize that it’s an outfit of power, authority and liberation. A suit can bring out both the female elegance and sexy mood. We can wear it from morning until late at night and depending on our overall styling and makeup to convey a different message… Ιt is a matter of mood and inspiration…

by Vanessa Metzer 1870s: The decade actress Sarah Bernhardt scandalized Paris by wearing a custom-made trouser suit, which she called her “boy’s clothes.” 19th: The century European women wore tailored jackets with long skirts, called costumes, for activities such as riding, archery, and walking. Trendsetters adopted them for everyday wear, and by 1905, they were common suits for women. 1914: Coco Chanel designed her first suit—a fur-trimmed jacket with a matching ankle-length skirt. 1930s: In the films Morocco and Blonde Venus, Marlene Dietrich wore a tuxedo and top hat while performing on stage. 1949: Ιn Picturegoer magazine Katharine Hepburn’s style was lauded as a shrewd publicity move: “That slack suit paid for itself several times over—for Katharine Hepburn got special mention in hundreds of different publications. 1963: President John F. Kennedy suggested that his wife wear a pink Chanel suit to an event in Dallas. When he was assassinated in the presidential limousine, the suit became splattered with blood, but Jacqueline Kennedy still wore it to the swearing-in of his successor, Lyndon B. Johnson. 1964: Andre Courreges introduced slim, minimalist pantsuits for women for day and evening. Until then, women had worn pants only for informal occasions. 1966: Yves Saint Laurent designed a woman’s formal tuxedo that he named Le Smoking. 1970s: We have “The Safari suit”! Patterned after military dress uniforms worn in hot climates, it consisted of (long, but sometimes short) trousers and short-sleeved jacket with patch pockets of a light suiting fabric, typically of beige or pastel shades of blue and green. It was worn with a short-sleeved shirt, mostly of open neck design, but occasionally with a tie. 1980s: The power suit—complete with shoulder pads, decorative buttons, and bright, feminine colors—was popular among corporate women. Soon the trend spread beyond the office. 1981: In the cover of Grace Jones’s album, Nightclubbing featured an image of the androgynous singer in an Armani suit with especially broad shoulder pads. 1987: Margaret King became Margaret Thatcher’s stylist, later saying that the prime minister wore primarily suits because “she was in a man’s world, and she had to look the part.” 2000: Hillary Clinton made her Senate-election victory speech, saying, “Sixty-two counties, 16 months, three debates, two opponents, and six black pantsuits later, because of you, here we are.”

2015: The today’s fashion suit can be cropped, seventies inspired, wide-legged, totally white or tartan printed, retro-inspired or contemporary looking. It looks like this Winter 2015-2016 is all about women who borrow clothing from the boys closet in muted and earth hues, while the cut and silhouettes are flowy, cropped and 1970’s inspired. Despite all those critics about mannish looking of modern women’s fashion, these suits are perfectly tailored and fashion models look just amazing wearing them on the runways.

Give me a Chance!