The film The Dolce Rosa Excelsa film opens with a determined Sophia Loren advancing towards the screen. As the mother of five sons she takes the role of the strong female matriarch, leading the restoration of a large Sicilian estate. The ancient family home Villa Valguarnera di Bagheria near Palermo has been lying empty and has visibly eroded over time. Sophia holds the keys eagerly in her hands. She throws the door wide open into a large dishevelled drawing room covered in dust. “Come on!” she calls out to her children. Rolling up her sleeves, she gets the work started. Walls come down, precious frescos reappear, beams are hoisted up from the roof and overgrown trees in the neglected garden are trimmed. Sophia remains working by her sons’ side, whilst Ennio Morricone’s soundtrack plays in the background. Passion and dedication move the story forward. The house is restored to its former splendour and the whole town is invited to a party to celebrate. Girls in party dresses walk through the garden. The striking Rosa, played by Kate King, catches the eye of Sophia’s youngest son. Stricken by her beauty, he picks her the most beautiful flower in the garden: a Carmine Rose. As she brings it up to her face, a drop of dew trickles out. She smiles as she gently dabs its natural and pure essence onto her neck. Meanwhile back at the house, Sophia touches up her lipstick in front of the mirror: the ultimate feminine gesture. She then joins the others in the garden for the party. Kate approaches and offers her the rose. Sophia looks at it and whispers: “Meravigliosa!” It is an encounter between two women from two different generations. A meeting filled with symbolism, beauty and tradition. A highly-charged cascade of spirit and elegance, as timeless as the Rose itself.

“It was an honour to work with these three masters of Italian cinema who bring our creative vision to life. Sophia Loren embodies Italian beauty across the world. We love Giuseppe’s sensibility, his perception of Sicily is the same as ours, so working with him feels very natural. Ennio Morricone’s music has always been a part of our culture, so it gives the story a celebratory, Italian feel.” Domenico Dolce and Stefano Gabbana.

The fragrance Dolce Rosa Excelsa captures the essence of fresh Rose petals in full bloom, heightening their intensity, flawlessness and myriad facets. The new scent enriches Dolce’s signature White Amaryllis with a distinctive new Rose heart. The Floral, Fresh, Floral fragrance opens with a brightly coloured and sweetsmelling explosion of Neroli leaves and Papaya flower, which blend into the White Water Lily and White Daffodil bouquet. The precious heart of Dolce Rosa Excelsa comprises two different noble and delicate notes of Rose. Soft and pure African Dog Rose premieres in this exquisite fragrance creation to bring an enchanting richness to the crisp character of Dolce. This rare note combines with the enveloping femininity of the Turkish Rose Absolute, highly-prized in perfumery for its olfactive intensity. With its deep pink flowers, the Turkish Rose Absolute unveils a sensual and elegant character when paired with the African Dog Rose. The floral heart of this enchanting scent is balanced by the warm, musky base notes. Combined with the complex accents of Cashmeran and Sandalwood, Dolce Rosa Excelsa leaves a sensual trail of gentle woody notes, earthy tones and tangy spices. 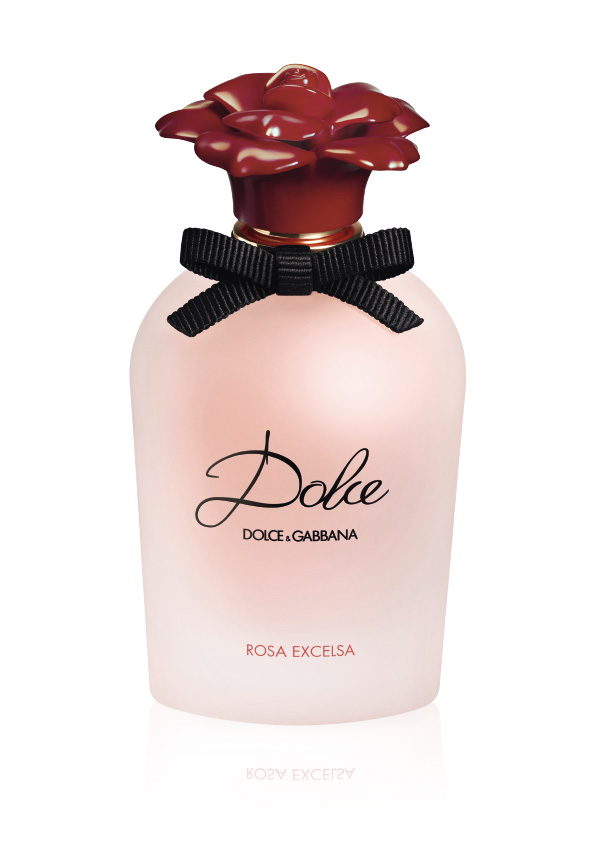